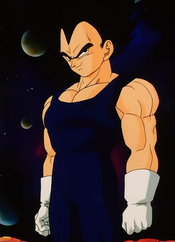 Vegeta is the prince of the fallen Saiyan race and arch-rival to Goku. He is the husband of Bulma, the father of Trunks and Bulla, the estranged brother of Tarble, and the great-great grandfather of Vegeta Jr. Aside from Goku, Gohan, and Piccolo, he is easily one of the most prominent characters in the series, receiving more character development after being introduced than a number of other characters. He joins the Z Fighters while battling along side them on Namek, and returns to Earth with them as well, where he remains for the rest of his life.Read more

Super Saiyan 2 (超サイヤ人ツー, Sūpā Saiya-jin Tsū;) is the direct successor to the first Super Saiyan transformation. It is very similar to the original form in appearance and attainment, however the power output is far greater, as speed, strength, and energy output all drastically increase. Gohan was the first person to attain the form while fighting against Cell in the Cell Games.Read more

Meet the Z Fighters and all of their foes here on Dragonballpedia.

Community content is available under CC-BY-SA unless otherwise noted.
Advertisement